The 2016 Summer schedule is available on our “Fixtures” page of the web and Venue Noticeboards. Matches start next Monday May 9 & Wednesday May 11 with 9 rounds played twice in 2 halves.  There is a break for catch ups at the end of each half.  The first round matches next week are:

Fees - Team registration must be paid by the first match.

Deferring Matches - Matches are expected to be played on schedule or before the next round. If matches are not played by then bonus points (now increased to 2 for Monday) will be forgone. Where a catch-up match is played, results will be included in standings. To discourage a possibility of tactical forfeits, offenders may be cautioned and corrective action decided by the committee.

Results Submission - For scoring and ranking a legible facsimile of results with the player detail is to be signed and sent as a phone-photo by home teams to the league administrator immediately after the match. Forms will be available on the web from Forms Download Link for printing or electronic completion. These will be changed once the new player ranking system gets under way. In the meantime paper copies will still be delivered to your venue for use next week.

Format and Scoring Changes - As indicated at the Captains Meeting on April 23, this season we are changing Monday points weighting. This will ensure an outright winner and keep the later 2 sets in matches potentially relevant. There is no change to games format. Wednesday race to 19 is unchanged, but format is changed to speed up matches. We play 4 doubles then 8 singles until one team gets to 19. Captains should managed any other time issues.

Match Points (Monday is changed - Wednesday is unchanged )
Points Scoring will follow the examples below. 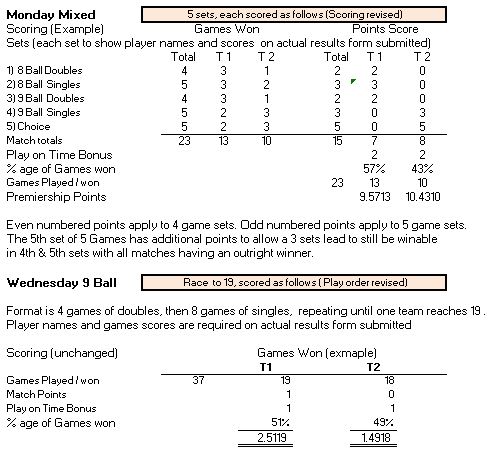 If needed, we can have a captains meeting early in the season to iron out any transition issues.


Full Season Schedule Link - Downloadable so you can retain. e.g on your phone.
Since the Captains’ Meeting on we learned Monday July 18 to 20th are holidays, which spans Round 10 scheduled dates. Hence we have elected to move the whole second half back one week after 2 weeks break. This allows time to play any catch-up matches.

Posted by Sukhumvir Social Pool League at Thursday, May 05, 2016