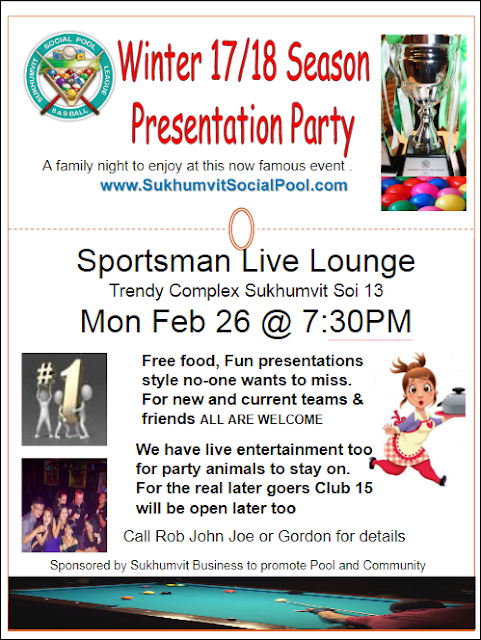 We kick off by 8pm at with
Trophies


We are proud to welcome Thailand Pool Tables. They will have their accessories stand if you need extra bits.

🎱     They have also donated Cuetec Pool cues for a Raffle

Look forward to seeing you all


Here are the teams being presented awards 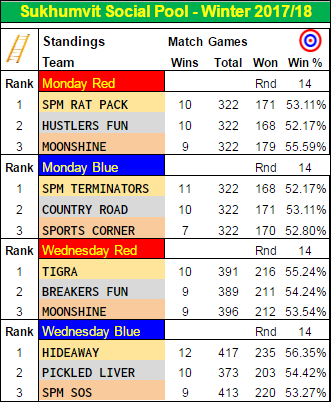 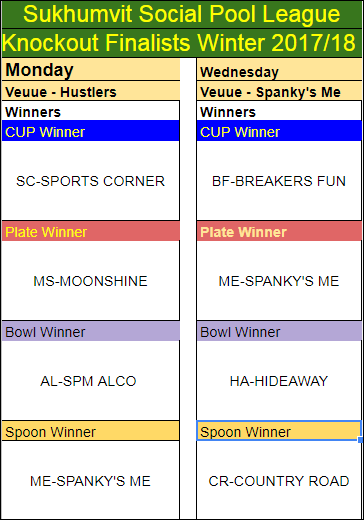 Next season dates are 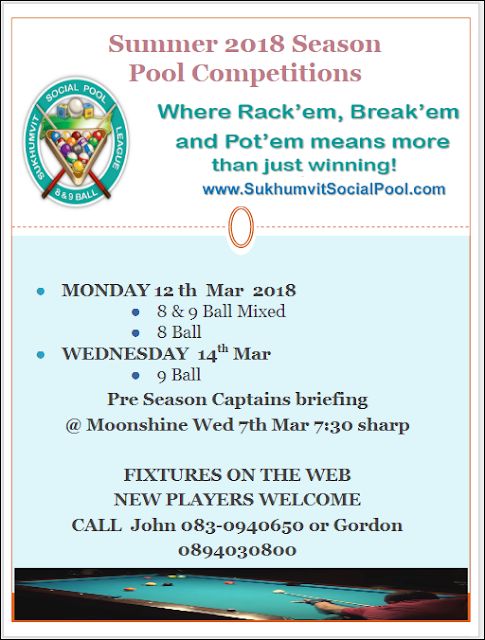 Drafting of Fixtures is in progress now


To get updates and final Fixtures please update you contact information here.

We are now full steam ahead planing for the End Of Season Presentation Party. That will  be on Monday Feb 26th at Sportsman Live Lounge who is hosting this season.

The last match of the Wednesday Red Competition was played last night, Wed Feb 7. The CUP series Final is pending on Feb 21 but this now completes all the League Competitions, with the ladder now final so we can order all their winner Trophies.

The match last night saw a great finish to the season with Exiles win over Ice Breakers the round 4 catch-up match. This meant the ladder finished up up with three teams, each having nine match wins so they needed to be separated on games won percentage.

Wednesday Red Final positions are:
It is interesting that Ice Breakers lost the match after a push foul was call after Ice Breakers potted the 9 ball. That meant Exiles had ball in hand to win which allowed them to get third place and which when posted to the ladder pushed Moonshine to fourth place. How can it be all so close after 14 round of play and 20 weeks elapsed.  That is so exiting and no way could it be planned.

So it just goes to show anything is possible in 9 Ball. But hang on; that was the case in all the competitions.

So for all of us who look forward to our pool nights, we do believe we may have perpetuated the fact that a win is synonymous with both sides having fun and committing to enjoying challenging each other as friends in a social spirit where everyone wins.

Congratulation everyone on such a great season.

Below are the final ladders for all 4 competitions.

Here is the final Wed Red Comp ladder along with the other three comps which are unchanged.

This week saw the last 4 semi final matches completed, Cup and other level finalists will play off at Hustlers on Monday 19th Feb and Spanky's Me on Mon 21st Feb.

Team Players and friends not playing in one of the 4 finals matches on each night, are all invited to join in watching what we hope will be a well supported fantastic event.

Here are some tables that show all the matches for the Knockout series. The teams on the far right are the finalists who are all now ready to go to see who will take the honour of having their name filled in the blanks.

What On and Next

There are no scheduled matches next week, But if you fancy a game check with

Toshi at Breakers may being doing likewise at that end of town.


Hangout (Call Sean) and Moderation (Cal Garry) are also rejoining us next season so go and give their tables a once over again. They are all on LINE and their numbers on the Captains Contact list.

Our last round Wednesday 9 Ball, and Monday Mixed this week, were reported as brilliantly enjoyable with skill, good luck and a decent measure of good fun tossed into the mix.


All top place winners should be proud of achieving and are to be congratulate by us all.
Other teams should proud too knowing our code of practice is fair play so we always have a level chance to give our opponents our best shot to beat them.
That makes us all winners in a spirit where; “Rack’em Break.em and Pot’em is about more than just winning”

Congratulations to our four competition winners

Congratulations also go to everyone for an amazingly season.
Three of the competition place positions are final so congratulations to those teams.
Position 2.3 on Wednesday remain pending a catch up next week when we also have Cup catch ups

Posted by Gordon Wood at Thursday, February 01, 2018 No comments: