Did you Know you can get Sukhumvit Social Pool League Updates delivered by email? Just click the link to subscribe.?

Here are the results for this week which include the catch up for, Club 15  vs Spanky's Me from Round 7.

Matches pending are: Exiles vs Ice Breakers Round 4, Exiles vs SPM Stoned Round 8

Qualifying venues unlucky not to be drawn were , ME  MX  ST  IB

Venues excluded from the draw because they had host 2 matches - Mon CR KS  and on Wed SD  WN.

Posted by Gordon Wood at Thursday, November 30, 2017 No comments:

Here are a coupe of reminders about events this week.
The ladder at the half way mark, shows 2 matches pending. IE. Exiles vs Ice Breakers from Round 4 and Club 15  vs Spanky's Me from Round 7


Select from the web menu, for  results, next matches and team information.

Posted by Gordon Wood at Thursday, November 23, 2017 No comments:

Here the teams remaining in each CUP Series section, after the knock-out round this week

The full results can be seen in item 5 in Fixtures & Results on SSPL web. This round detail:

The semi finals draw will be held at the Moonshine Pub at 8 PM on Friday 24th November.


The intent was to play all round 3 at a neutral venue. So we will draw the 8 hosting venues for each night and allocated the 8 matches drawn so no teams plays on their home table venue.

The random draw for venues with give preference to balancing those venues who have not had a home match and vice versa.

Here is a table of matches locations already played. 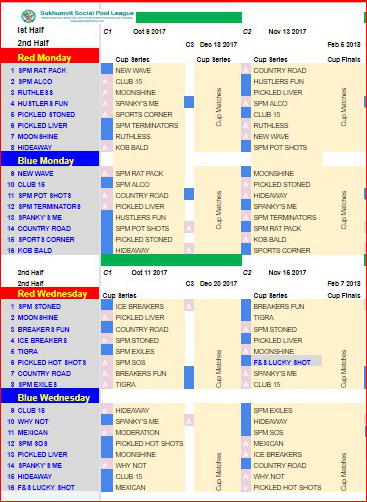 The priority venues will be venues that have not had a home game, IE Hustlers Fun and Sportsman Pot shots played away twice, therefore Hustlers and Sportsman host in lieu. Two venues not eligible for a neutral Semi Final are K & S and Country Road. as they have had 2 home matches.

The other 6 venues will be drawn at random and then the matches will be allocated on a basis of maximum convenience for both teams.

Under no circumstances will any team play a neutral semi final in their own venue.
Posted by Sukhumvir Social Pool League at Friday, November 17, 2017 No comments:

Here are the scores and ladder update after with all matches played for Wednesday Round 6  All matches were played.  Team Detail >>

Next week the cup series continues as tabled below. Each drawn match shows the first row team at home. 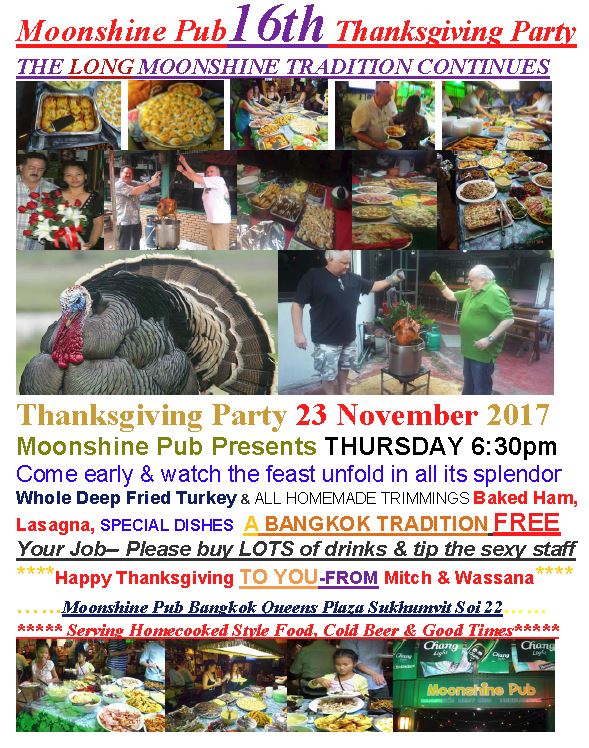 This is without a doubt a day not to be missed. Hope those available can attend.

Thanksgiving is a time to celebrate the good fortune that has blessed us in 2017.

Moonshine Pub houses hollowed grounds, many have had boundless gifts of love & happiness bestowed upon them within these sacred walls.

The splendid homemade style food offerings from Wassana & Mitch cast the aura of the evening, an outpouring of love, kindness & gratitude. One ongoing for 16 years----a Bangkok Tradition extraordinaire!!

Come and join us to celebrate Moonshine Thanksgiving 2017. And the scrumptious dinner is all free from Wassana & Mitch. Show you love & appreciation by bombarding the sexy staff with an abundance of drink orders & generous tips.

It's quite a show to watch the marvelous dinner table unfold in elegant glory. Come early.....

6pm for Cocktail Hour.and the Dinner bell rings at 7pm.

Please note next week the cup series continues . The draw is below. The match pairs show the first row team at home.

Posted by Gordon Wood at Tuesday, November 07, 2017 No comments:

The debit point for No Play/Score Matches, will be credited when played
Posted by Gordon Wood at Saturday, November 04, 2017 No comments: