As you see, the smiling faces of both teams, give nothing away to say any team lost out on having fun.


On the ladder, the battle for positions is so close too. With just 3 and for some only 2 rounds to go it seems everyone knows how to win matches but more interesting this season is how teams concentrate on winning games too. They all know even if they have lost a set or a match on the night the games still count.

Winning matches keep it all focused and fun. Its the same with sets to win a match. But the games, in the end, will again decide most ladder positions this season. And that's making it so exciting.

To add to the thrill, we saw one team, on Monday this week who had already lost their match at the 4th set, then playing their hearts out to win more games to keep their chances alive for a trophy position. The other team once they had won at the 4th set saw some of their players leave soon after, so their opponents clawed back. I will be interested to look back at season end to see if that cost them a chance for a trophy.

Another top team told us they knew they had a bye making it hard to predict, so they just went all out to win everything right down to the last game Thate meant even after they had won the majority of sets for the match win at some point, they still did not let up.

The races within races are all up for grabs too. They are not only for top 3. but the 3 or 4 in below are in battles for a 4th place or runner-up. The inevitable battle that just 2 or 3 teams face is one to stay off the bottom. Each group is close, with some teams still able to upset or advance which is making it so exciting, with no one safe yet.

Please check your results detail on the Live Ladder. We will lock results after the round 13 catchups so make sure you don't have any last minutes scoring issues unresolved We will also resolve if any playoffs might be needed because of the dropouts that left uneven play positions.

Captains, please make sure your team fees are paid We still have a few teams who are still not financial.

Snapshots of results follow. Please note #N/A. means no scores posted or the match deferred. Catch-ups and scheduled dates are as listed at the foot:

If you are having trouble reading this as an email, try the web version.

Here also are the next 3 rounds

Catch-Ups
Please start planning for you catchups. Remember, if matches are agreed and not played the team defaulting will forfeit the match to their opponent.

Any matches with no agreed dates or advice after 7 days of the schedules data will default against both teams.
Even though it is the home team captain's first responsibility to advise CERROS of the match results or another status by 10am the day after the match, both captains are responsible to sign off before the next round once results are made public.

Any defaulting are deemed not to have played all matches and are therefore excluded from Trophy qualifying.

All of these rules have been in place for a long time so we all know them by now. We do gove a lot of latitudes as we always have new teams and new captains who have not been thru a full cycle
But in the end, we must all conform so please help the new teams and captains to do this.

Here are the matches still pending :

Knockout Series The Knockout Cup series will start on July 9 and be played over several elimination rounds and finals. We will draw the first round teams, during the catchup week. We will send out separate communication with more details once we have finalised a venue and the day best to suit most

Our Hosting Sponsors:
Take a look at their What's on the Offer page 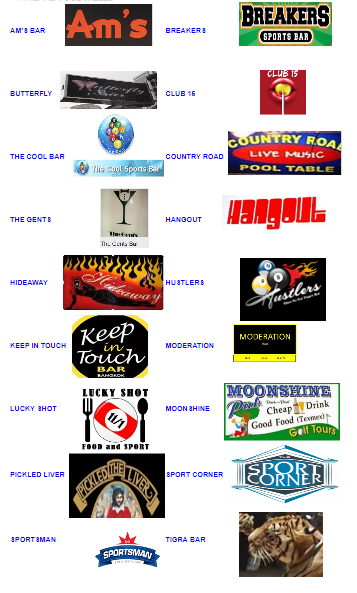