Round 7 Summer 2018 Results after Catch ups

With catch ups played to Round 7, all teams are in line on matches, so next half positions are clear for the run to the final. As always, please check your results.

Catch-ups are important to let us play all matches and avoid forfeits. Once all efforts are exhausted and catch up still cannot be played, a forfeit is declared. This applied to Moderation who dropped out of Wednesday.  Their outstanding matches were forfeited to their opponent. Thay also get the show up credit for continuous play qualifying purposes.

In the event a team achieves is in trophy position after round 14, and leads by no more than the forfeit wins, playoffs between contending teams will decide the trophy awards.This lets us comply with our long standing convention that a team must play all matches (continuous play) and cannot win a trophy on a forfeit.

Catch Up Fixture
This season we introduced a separate catch up week in the fixture. It seems to have worked well to restore the integrity of the playing order and ladder. Some teams, still eager to not miss out a night of pool fun, still showed for round 8 and played that match early.
Thanks go to everyone for being patient with those who had to defer, and for making the commitment to follow thru for them. Another catch up week is scheduled after round 13, so we can complete the season on time. 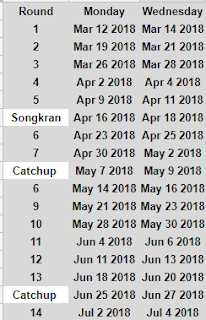 Next Round Notice with a New Format

Next week, commencing Monday May 14,  sees round 8 continue, where teams play each other at reciprocal venues for the 2nd half round robin matches.

Please note blue on location boxes on Wall fixtures means you play away this time. Individual team sheets are marked H or A on dated rounds

We have simplified the format of Next Match advice on the web. That's the one we update and send on Sunday after each round is closed. We now plan to send this out on Saturday. 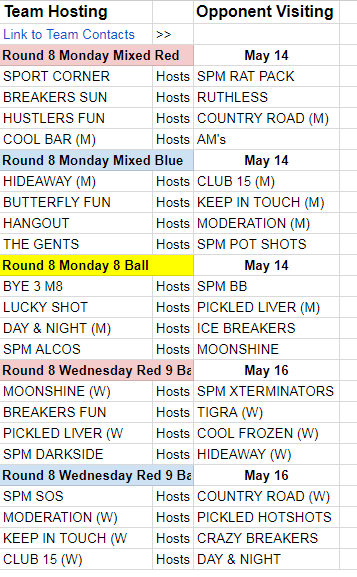 As most know, individual team fixtures and progress are a drill down option from the ladder. These have been updated to show catch up and holiday weeks so it is more consistent to read. We will add the knockout rounds once known. 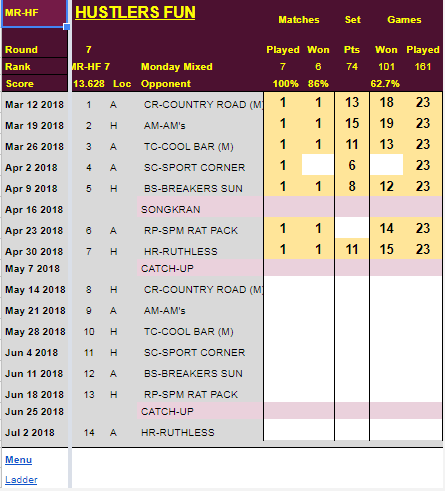 Navigation from to other menus is also included. Thanks to the Graham from Hustlers and others for the ideas to improve team pages for Captains to plan and share with their players.

Some score sheets are not being filled in properly with team and round numbers missing. This adds confusion when checking back. If you miss the 8 Ball you will be forgiven but if you miss the finals because of bad paperwork you won't.


We dropped the burden on both captains so only one needs to send a countersigned sheet. CERROS is done only by the host captain and is simple and easy to verify if the pictures are complete. The sign off box also has enough space to write all relevant info. Please help make this work to reduce confusion and unneeded admin.


Joining us at the halfway Mark we now welcome to DAY & NIGHT CAFE & SPORTS located at SOI 48 / 3 Sukhumvit. They are fielding a Monday 8 Ball and Wednesday Blue 9 Ball team to take up one of the bye slots. Being mid season they cannot participate in trophies but we look forward to including them in all other respects.

This is the first time we have added a new team mid season. We trust this will be a good way to ease new bars into our ranks at the half season mark to take the strain of the season change recess where pressure to fill gaps, make introductions and orient new team is potentially clumsy and time critical.
Matches played will be treated as friendlies for them. But for the rest of us scores when  playing DAY & NIGHT, will count for full trophy positioning.


Even though it is only half a season everyone will have a chance to play them to get a higher percentage. Those not able won't be penalized for no show  as long as you let them know good time. But then you will have no chance to gain ground either.

Some teams may have already planned a break on the the bye slot DAY & NIGHT took over, and cannot play, so please let them and the league know ASAP.

KNOCKOUT SERIES
We will be starting the CUP series, after round 14 last home and away league match. Todd Guest is the co-coordinator working with the rest of the committee and will advise more on that shortly.

Our Industry sponsor are: 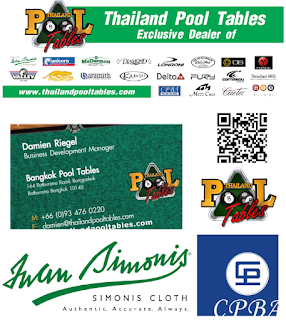