In the Monday Mixed Red competition final last night, a great battle took place between two Hustlers gladiators. Hustlers Fun and Ruthless Hustlers went head to head on the last round in a "To the death winner takes all" match. The game was a roller coaster and went down to the last few frames, with Hustlers Fun the victors. What a night and a great end to the season with Rat Pack also a close finisher just one match behind in 3rd place. This winner circle picture says it all, as you can see from the winners' smiles and the pained look on the faces of those slain.

We need to acknowledged a few others too for their efforts.  Sport Corner and Country Road came up from the Blue division this season and Cool Bar, Breaker Sun and Am's joined our league. All 5 gave it thier all in brilliant efforts to try to unsettle the traditional leaders. Am's bar who took over a Red slot is in the eyes of most, first on the best of best social teams, Its a great pity they cannot continue, which they assure me is temporary and not because of their place.

In the Monday 8 ball competition in round 13 we saw the ladder clearly unchangeable, with the fantastic battle that saw "Sportsman Alco" win over "Pickled Liver" to set the final season positions "Moonshine" who took up a well deserved third place in the trophy slots  Early season drops leaving byes was a shame; But if you put to the side the Trophy Group, you will see those remaining, Sportsman BB, Lucky shots and Ice Breakers  all ended up being place holders in the Contenders Group. The experiment to add the 8 Ball division this season, it seems, was a great success.

In the Monday Mixed Blue competition, Butterfly Fun along with Day and Night Keep in Touch, and Hangout reconstituted, all came in new this season, to show us some tricks we thought we already knew. In our formative days, we started as a drinkers league and later forged a solid notion that as social culture SSPL is also about playing well together. All our new teams have done that in spades.

Butterfly Fun who play for fun too, at the same time kept The Gents and Hideaway at bay. Both these seasoned winners in SSPL defended well in the very close "any one can win" last few rounds, Last night saw Butterfly cement top place in the deciding final match with a win over Club 15 who never give up and took them to the wire. Well done all three and those who tried to knock them off.

It is noteworthy, that for the first time in SSPL creation, we had 2 Monday teams finishing equal on matches and games won. That meant we had to revert to a count-back on sets points won. That gave Club 15 the 5th place over Sportsman Pot Shots. Club 15 are delighted and now understand even more, the importance of winning sets, which like games,  also count for the season. In the end if that is all too complicated,  just enjoy playing and let the tacticians figure it out. Its just a game and just about being fair so we can all enjoy it. 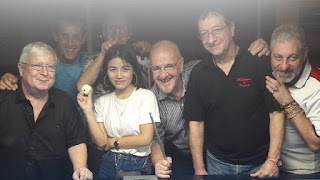 But philosophy aside Pot shots on the other hand are kicking themselves that they did not win just one more game during the season; or even last night when they did so well against Hideaway. Their last minute rush was all too late and Club 15 deserve their place as a being clearly more consistent.

It was tight all season all the way and just wonderful to see the ebb and flow of tactics and talent.

Overall the delightful camaraderie made the experience without doubt one of our best ever socially competitive seasons, with absolutely no issues.With all teams focused on enjoying the challenge of playing each other, everyone is to be congratulated for getting a place in the final SSPL ranking.

Here is the full table of results for round 14 Monday. See live web for any deep detail. The top teams are all clear but before we formally declared all places, captains are giving it a final once over. Three cheers to all, and here's to the winners and all the teams who helped them get there.

Yes the band is still playing while we hold back the fat lady to sing and signal the end of the performance. Wednesday final matches are still to come this week, and final positions are not certain by any short straw. This exciting position sees 2nd, 3rd and 4th places still up for grabs. There is also a potential for a play off to decide 2nd place. If that happens all shore leave will be cancelled for two lucky teams who will get to answer one more challenge.

The series also starts Next week on Monday. Sorry no rest for the weary but we need that extra mile to prove our worth or maybe to just enjoy being formidable.

As most of our 38 teams would already know,  to complete the season we will run the CUP series to determine best of over all champions by class. Todd Guest who is CUP co-coordinator has already posted the details internally and they are all now on the web

But its not always about playing Pool but it gives us an excuse to enjoy some social activity too.  Last Thursday we had a very successful event at Hideaway when, we did a draw of who will play who and where first  to kick off the series. Yes it was about pool but the pool table was cover in food so that makes it social yes?

With a  no-handicap, no seeding  model the aim and design is to break down the so called Gold, Red and Blue color classes to get the whole league mixing and playing together more.

Overall after a settling in time for people to get drinks and some food and say hello it then took about 17 minutes to overview how it will work with the new scoring and ranking, before a rapid fire fan-fair style draw got under way involving all teams that was all done by 8PM. We even streamed it to reach the wider group who could not come and we were all amazed after that it had worked so well too.

It was a great deal of fun that somehow had many of the 30 + still there late into the evening talking about it and much more just enjoying. Not surprisingly were the headaches the next day too.

All 36 teams now participating will all qualify in some form in one or the next class with a 3 week round robin played in groups. This is then followed by a semi where after everyone is re-ranked by class to they play a knockout in a neutral venue so the 2 left in each play off in a final at Sportsman and Breakers for respective Monday and Wednesday Cups. All Teams have also adopted a country .

In keeping with that theme and the format we are calling it the SSPL KEGS World CUP.